We chose M51 as the first image of our new scope: 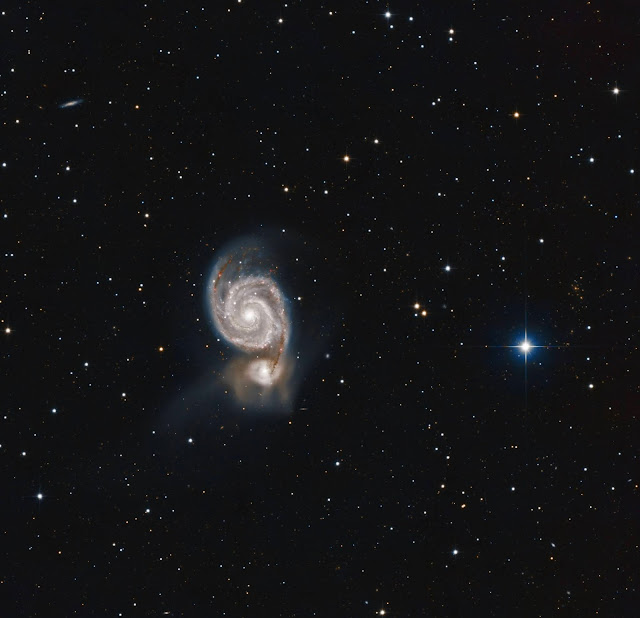 (click on image for full resolution)
M51 is a spiral galaxy in a distance of 23 million light years and has a diameter of 76,000 light years - which means it's slightly smaller than our own galaxy (105,700 light years). It was discovered by Charless Messier on October 13, 1775 - though he only discovered the main galaxy. The smaller galaxy (NGC 5159) was discovered 6 years later by Pierre Méchain.
The most prominent feature of this galaxy is the encounter with the smaller galaxy (at the bottom in the image). Although it looks like a frontal encounter, the smaller galaxy (NGC 5159) is actually passing behind the larger galaxy. This process has been going on for hundreds of millions of years.
Another interesting aspect is the larger number of supernovae in M51. There have been supernovae in 1994, 2005 and 2011 - three supernovae in 17 years is much more than what we see in other galaxies. It's not clear what causes this - and if the encounter with NGC 5159 has something to do with it.
It took me a long time to figure out how to process images from it:
Interestingly M51 was also the first images I took with my Celestron EDGE scope 7(!!) years ago: https://mstriebeck-astrophotography.blogspot.com/2013/06/first-image-with-new-setup-m51.html. What a different darker skies, better equipment and 7 years experience make :-)
Posted by Mark Striebeck at 1:12 AM